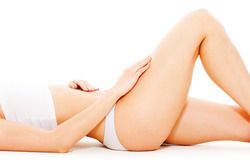 Excess fat around the hips, waist, and other problem areas bother many healthy people who maintain a healthy lifestyle with proper diet and exercise. For those who want to get rid of those annoying bulges, liposuction provides an effective way to achieve a trimmer, more toned look. A certain technique referred to as tumescent liposuction is widely considered the safest and most effective form of liposuction surgery. We're pleased to offer the tumescent liposuction technique in Bethesda and around the Washington, DC, area to patients who want a sleeker physique.

What Is Tumescent Liposuction?

The tumescent liposuction technique involves the injection of a large amount of fluid into the area of fatty tissue. The fluid contains an anesthetic called lidocaine that numbs the area and a drug called epinephrine that helps shrink blood vessels. After the injection, the fluid fills the treatment area and helps the fat cells swell up, making them easier to suction out of the body. Although the procedure takes longer, it generally produces fewer complications, a shorter recovery time, and smoother results than traditional liposuction.

What Are the Benefits of Tumescent Liposuction?

Tumescent liposuction is one the most popular techniques because this type of plastic surgery has fewer unpleasant side effects than traditional liposuction, including:

With minimal side effects, patients tend to recover from this procedure more quickly than traditional liposuction and often achieve smoother results.

What Is Involved in the Procedure?

After the injection of the fluid, tumescent liposuction is very similar to traditional liposuction. Using a thin tube called a cannula, the plastic surgeon targets and suctions out unwanted fat to produce a more streamlined, attractive shape. Some patients opt to complete their enhancement with other body contouring techniques, such as abdominoplasty ("tummy tuck"). It should be noted that liposuction is not a substitute for weight loss. Generally, patients who seek liposuction should be in good health, have good skin elasticity, and be near their ideal weight.

What Can I Expect After the Procedure?

Almost immediately after your surgery, you will notice a significant improvement in your body contours. Initial results in the first few days, however, will be partly hidden by minimal swelling and bruising. You might also experience soreness and minimal bleeding. Most patients are able to return to work and other normal activities within a few days. Depending on the treatment area, you might need to avoid strenuous activity for a couple of weeks. As swelling continues to go down, the treated area will look smoother and more toned over the next several weeks and months. In three to six months, your slimmer, fitter figure will be revealed.

Over many years of experience, Dr. Oldham has perfected the art of sculpting the body through liposuction. If you are interested in tumescent liposuction to remove specific fatty deposits and reveal your body's natural and beautiful lines and curves, we invite you to schedule a consultation.